When I Read: New York


New York, New York, a helluva town.
The Bronx is up and the Battery is down. 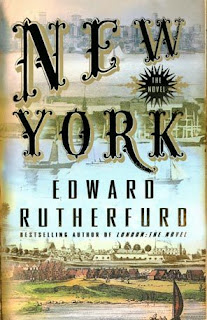 Those song lyrics don't really get around to my favorite part, Brooklyn, but thankfully the a great book,
New York by Edward Rutherfurd does. New York is a book I reference often to explain the history of New York and how things have come to be in the great city that I call home, and better still, birthplace.
In fact, I love the book so much that in the midst of reading it I started developing an entire cultural history course and syllabus based around this book and using historical documents and movies as the vehicle for the semester. Eventually, I remembered that I was not a professor (yet). So, yes, I'm a geek, but it was that good.

Rutherfurd's tome (because it is huge and long) starts out with Nieuw Amsterdam and the days of Dutch colonialization, complete with social norms, race matters, and ends with the 9/11 attacks, definitely a turning point for the city in modern times. New York uses the tale of one fictional family, the Masters, as the vehicle for telling the story of the city's history and all its changes. Through the family we see both the rich and poor, several ethnic groups at different points in times and snapshots of the boroughs that comprise the city. There is no major historical moment that is left out and over the course of time you understand the formation of the city's geography, development of cultural institutions, and learn how some famous New Yorkers became famous. Want to learn about the Morgans? It's in there. Interested in the era of mansion developments? Covered. Draft riots? Plainly discussed. Different waves of immigration? Explicitly detailed.


Surprisingly even with the constant shift of characters, the story is not hard to follow nor are the character traits difficult to keep track of. Rutherfurd does an excellent job of moving the story along. At moments he does keep the female characters harsh, but compromises by often making the matriarchs the familial brains and saviors lest a hairwired decision destroy the entire family.

In practice, New York is the merger of various books and documentaries into one gripping story. It's the combination of Edith Wharton novels I never finished, Gangs of New York, those PBS walking tours and Sven Beckert's Monied Metropolis. Quite arguably, the most compelling stories are between the Civil War and the Great Depression, where the  building of wealth and development of America into a great nation largely played out in New York. The people of New York are the players in the backstory of The Men Who Built America.

There is one place where Rutherfurd plays a dirty trick and one family line you believed you would follow through time gets cut short. Continuing the story of that family would in fact have been an extraordinarily difficult feat for Rutherford to pull off, but would have been extremely rewarding for the reader.


New York starts off as a momentous task and undertaking but quickly becomes a joy and great history lesson putting contemporary New York into great focus. It definitely rates as the best book I've read in the past 5 years (which considering my general book choice may not say much. Poor Little Bitch Girl anyone?). Even a non-NYC born and bred reader could embrace this story.