Harriet Tubman, Sojourner Truth, The Shadow and The Substance....The Fight for Ownership 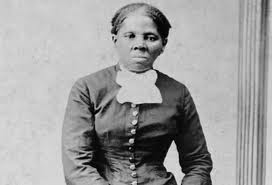 By now social media has made everyone aware of last night's Russell Simmons/Harriet Tubman fiasco in which a spoof was made of Harriet Tubman making a sex tape  that she could use as a bribe to be granted freedom and the Underground Railroad from her master who had previously raped her.  While several issues in the twitter-sphere do take legs- hello Arab Spring- most fizzle away until a new hot reality show trending topic takes its place.  There is not much left to say about the actual video. It was crass, disrespectful, disgusting, and not remotely funny- at all. Perhaps an argument could be made for art or humor if there was any witty satire or striking commentary. However, the weak argument of Harriet Tubman's agency in outsmarting her master did little to counter the lightness made of rape or the stereotypical images of black men and women perpetuated in a 3 minute skit. This wasn't a grand tale of a woman using what the only devices she owned. It was a bad and inaccurate version of history combined with modern commentary that was devoid of wit, nuance, or commentary.

While there is no redemption to be found in the tape, or in Russell Simmons' apology, there is a glimmer of light in the response. Twitter was awash with women  lambasting the act, expressing their outrage, and demanding action. Along with the NAACP and a petition , the video was quickly removed and a conversation on patriarchy- both mainstream and its manifestation within ethnic groups- was launched. For all the agency that media portrayals tend to strip women of, this showed how an undefined consensus of women could get action in a rather quick time. Even though it may not have been as monumental as a law, it was a clear act to own and manage the image. 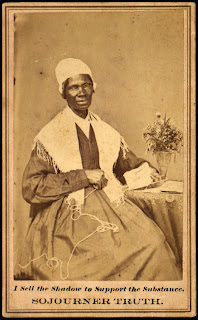 Tubman's contemporary, Sojourner Truth had a portrait (carte de visite for you fancy historians) that she coupled with the powerful quote, "I Sell the Shadow to Support the Substance." In the dawning age of photography, Truth understood the power of her image and the manipulation of it as such. Once a figure passes, the battle for their memory and image is a war fought not only by family members and historians, but my cultural makers and politicians all looking for economic, social, and political gains with their work. Save for those with estates,  the image and memory becomes a public commodity. And in some cases, this shadow arising from the grave, has dire impacts for those left behind in how they are perceived, treated, and respected. In an age where sex tapes have brought notoriety and fame, but not much respect, placing a woman who devoted her life to helping others escape from the brutal and demoralizing system of American Slavery into that realm does nothing to boost her image, or the image of those in her likeness.  The shadow was sold, but the substance was left to rot. As the recipients of the substance's legacy, it is our weary and unwanted battle that we are left without choice to fight.

In light of Russell Simmon's recent commentary on Don Lemon,  in which he went as far as calling the misguided news reporter a slave, its easy to assume there would have been more thought before referring to the skit as the funniest thing he's ever seen.  Since Simmons has since apologized for the Tubman video, it makes no sense to begrudge him, but to simply weep for his sense of humor.  But while crying, keep the armor ready and stay vigilant because the fight for the substance is not over.