The Writing On The Wall: Tawana Told The Truth

Tawana Brawley is a figure that lingers in the conscience.  Somehow- likely due to my New York City upbringing- I grew up aware of this young lady's story. Then in 2006 during my one millionth viewing of Do The Right Thing for a Protest Literature course, I noticed the writing on the wall and started on the path of embracing one of America's more interesting racially infused stories in contemporary history. The writing on the wall became my desktop background from the next 7 years and every day I read the lie that Tawana Told The Truth and accepted there was some truth lingering in the background, even if it was not fully dissected. 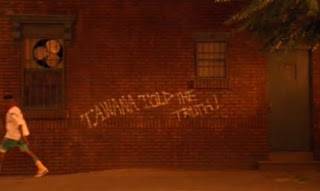 This week Ms. Brawley came back into the light. This post on  Blaxidermy  first alerted me to the fact that something was happening again, with a nice little throwback to Reverend Al's former self. There wasn't as much coverage as one would expect, but this enlightening op-ed on The Root called on Tawana to tell the truth for several reasons, including righting past wrongs, financial common sense, and ceasing the defamation of character that has been levied on one of the men she wrongly confused.

In no way shape or form do I sanction what Tawana Brawley did despite her being young, scared, and foolish. What stands out for me is that the case till this day seems so plausible. Do The Right Thing is a movie made to honor men killed in New York City as a result of racially motivated crimes. For this to have happened in the same time period made sense to a people angry and  upset at the existing tense atmosphere.  It could have been someone's truth, and despite Ms. Brawley's fib , the plausibility of it happening is part of the history that we have to remember and carry with us.

The obvious counter is to acknowledge that the very definition of plausibility means only possibility and that there are very different percentages of possibility. Basically, anything can happen.  No one calls for anyone to look at the plausibility of wrongfully convicted minorities committing crimes, because  of the way history and the system is stacked. Context is what makes the difference.  If the abuse of Tawana Brawley at the time did not seem likely, it is doubtful that those with high profile public careers would have gone out on the limb to protect her. If the anger didn't exist at what seemed liked a continual history of disregard for a group of people,   Ms Brawley could have struck a million matches, but no fire would have been lit.

A year later, a woman in New York City was brutally assaulted while jogging in Central Park. Cue another media circus. This young lady told the truth, and this time it was the state- not a foolhardy teen - who destroyed the life of innocent boys who did no wrong. Plausibility reeked its ugly head again. History still reads that one set was convicted and one group was not.

The misfortune in all of this are the lives forever ruined because of one girl's lies and one man's bad idea of a good night.  These truths are the painful history we carry and the memories we must not forget, but overcome.