Peep the article below on the lack of minority models. There's also some interesting features in October's Marie Claire about race and a global trend of ethnic ambiguity and attempts at looking more white. Ebony's September issue also looked at blacks in fashion. Or you could look at this, but spare yourself. BethAnn Hardison, mentioned in this article, has also been hosting some conferences on the topic (The Fashion Bomb has coverage of the last conference). It seems like this is cyclical, but let's hope that changes noted now stand longer. Old news is still new...
Haul,
The Queen

IN the days of blithe racial assumptions, flesh crayons were the color of white people. “Invisible” makeup and nude pantyhose were colored in the hues of Caucasian skin. The decision by manufacturers to ignore whole segments of humanity went unchallenged for decades before the civil rights movement came along and nonwhite consumers started demanding their place on the color wheel. 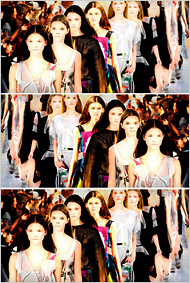 THE LINEUP At recent spring shows, black models were scarce or nonexistent, including at the Chloé show in Paris, above. 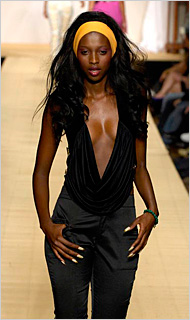 FRESH FACE Honorine Uwera was hired for five New York shows, too few to justify a trip to Europe.

Nowadays the cultural landscape is well populated with actors, musicians, media moguls and candidates for the American presidency drawn from the 30 percent of the American population that is not white. Yet, if there is one area where the lessons of chromatic and racial diversity have gone largely unheeded, it is fashion. This reality was never plainer than during the recent showings of the women’s spring 2008 collections in New York and Europe.

Although black women in the United States spend more than $20 billion on apparel each year, according to estimates by TargetMarketNews.com, it was hard to discern an awareness of this fact on the part of designers showing in New York, where black faces were more absent from runways than they have been in years.

Of the 101 shows and presentations posted on Style.com during the New York runway season, which ended a month ago, more than a third employed no black models, according to Women’s Wear Daily. Most of the others used just one or two. When the fashion caravan moved to London, Paris and Milan, the most influential shows — from Prada to Jil Sander to Balenciaga to Chloé and Chanel — made it appear as if someone had hung out a sign reading: No Blacks Need Apply.

“It’s the worst it’s ever been,” said Bethann Hardison, a former model who went on to start a successful model agency in the 1980s that promoted racial diversity.

AMONG the people she represented were Naomi Campbell and Tyson Beckford, the chiseled hunk who broke barriers in the 1990s by becoming the unexpected symbol of the country-club fantasia that is a Ralph Lauren Polo campaign.

Last month in New York, Ms. Hardison convened a panel of fashion experts at the Bryant Park Hotel to discuss “The Lack of the Black Image in Fashion Today,” an event she will reprise Monday at the New York Public Library on 42nd Street. “Modeling is probably the one industry where you have the freedom to refer to people by their color and reject them in their work,” she said.

The exclusion is rarely subtle. An agent for the modeling firm Marilyn once told Time magazine of receiving requests from fashion clients that baldly specified “Caucasians only.”

The message is not always so blatant these days, but it is no less clear. Take for example the case of two young models, one white, one black, both captivating beauties at the start of their careers. Irina Kulikova, a feline 17-year-old Russian, appeared on no fewer than 24 runways in New York last month, a success she went on to repeat in Milan with 14 shows, and in Paris with 24 more. Honorine Uwera, a young Canadian of Rwandan heritage, was hired during the New York season for just five runway shows.

While Ms. Uwera’s showing was respectable, it was not enough to justify the cost to her agency of sending her to Europe, where most modeling careers are solidified.

“We represent a lot of ethnic girls,” said Ivan Bart, the senior vice president of IMG Models, which represents a roster of the commercially successful models of the moment, among them black superstars like Alek Wek, Ms. Campbell and Liya Kebede.

“We have new girls, too,” Mr. Bart added, young comers like Ms. Uwera, Quiana Grant and Mimi Roche. “We include them in our show package, give them the same promotion as any other girl, and get the same responses: ‘She’s lovely, but she’s not right for the show.’”

Although, in fact, Ms. Roche and Ms. Grant, both black, were seen on runways in the last five weeks, the reality was that only one black model worked at anything like the frequency of her white counterparts: Chanel Iman Robinson, 17, who is African-American and Korean. Particularly in Milan and Paris, Ms. Robinson’s was often the only nonwhite face amid a blizzard of Eastern European blondes.

It is not just a handful of genetically gifted young women who are hurt by this exclusion. Vast numbers of consumers draw their information about fashion and identity from runways, along with cues about what, at any given moment, the culture decrees are the new contours of beauty and style.

“Years ago, runways were almost dominated by black girls,” said J. Alexander, a judge on “America’s Next Top Model,” referring to the gorgeous mosaic runway shows staged by Hubert de Givenchy or Yves Saint Laurent in the 1970s. “Now some people are not interested in the vision of the black girl unless they’re doing a jungle theme and they can put her in a grass skirt and diamonds and hand her a spear.”

And some people, said Diane Von Furstenberg, the designer and president of the Council of Fashion Designers of America, “just don’t think about it at all.” Ms. Von Furstenberg herself has always employed models of all ethnicities on her runways. (This September, she hired seven black women, more perhaps than any single label except Baby Phat and Heatherette.) Yet she is increasingly the exception to an unspoken industry rule.

“I always want to do that,” she said, referring to the casting of women of color. “I can make a difference. We all can. But so much is about education and to talk about this is an important beginning.”

But isn’t it strange, she was asked, that she would have to invoke the rhetoric of racial inclusiveness at a time when Oprah Winfrey is the most powerful woman in media, and Barack Obama is running for president?

“Why did we go backward?” Ms. Von Furstenberg asked.

Agents blame designers for the current state of affairs. Designers insist agents send them nothing but skinny blondes. Magazine editors bemoan the lack of black women with the ineffable attributes necessary to put across the looks of a given season.

The current taste in models is for blank-featured “androids,” whose looks don’t offer much competition to the clothes, pointed out James Scully, a seasoned agent who made his mark casting the richly diverse Gucci shows in the heyday of Tom Ford. In today’s climate, it is far more difficult to promote a black woman than her white counterpart.

“You want to sell the model on the basis of her beauty, not her race,” said Kyle Hagler, an agent at IMG. Yet when he sends models out on casting calls based on what he terms a “beauty perspective,” omitting any mention to potential clients of race, “You always get a call back saying, ‘You didn’t tell me she was black.’”

THE reasons for this may seem obvious, and yet the unconscious bigotry is tricky to pin down.

“I’m not pointing a finger and saying people are racist,” said Ms. Hardison, who nevertheless recounted a recent exchange with the creative director of a major fashion label: “She said to me, ‘I have to be honest with you, when a girl walks in, I just don’t see color.’ Meanwhile, they have one girl, or more likely, none in their show.”

Ms. Hardison explained: “‘I don’t see color?’ Does that mean, you don’t want to see?”

There is something illustrative of the entire issue, and the state of the industry, to be found in this September’s Italian Vogue.

Just one image of a black model appears in the issue, midway through a 17-page article photographed by Miles Aldridge and titled the “Vagaries of Fashion.” In it, the glacial blond Anja Rubik portrays an indolent, overdressed Park Avenue princess with a gilded apartment, a couture wardrobe, two towhead children and a collection of heavy rocks. The sole black model in the pictorial is more modestly attired, in an aproned pinafore.

She plays the maid.