Extra Credit Reading: The Economist on The Other Obama 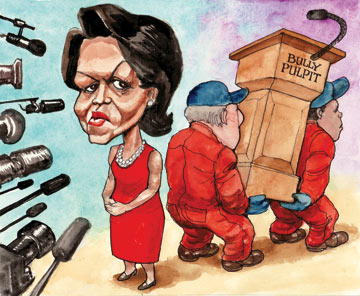 Like many other young, eager, wide eyed and bushy tailed women, I became enthralled with the image of Michelle Obama during the 2008 Presidential election campaign season. She was smart, high achieving in business and cool. I even campaigned amongst friends for Michelle Obama as First Spouse sometimes ignoring the politics of actual candidates. And as this obsession with her cool emerged in the media, the emphasis on her career and education became secondary to her down to earth manner, ability to connect and her wardrobe.

Part of the issue lies in what defines cool within larger society. Princeton and Harvard are impressive, but fusion high and low end dressing is cool. In last week's Economist, Lexington (yea we have no idea who writes this stuff...part of "Economist" policy) called on us to bring this into check and remember Michelle Obama for her accomplishments and consider her opinions and views in "The Other Obama". Since I am a glutton for chick lit, I know from American Wife that Alice Blackwell-the fictional Laura Bush- would tell her to go for it. After living eight years under the shadow of Hilary Clinton's time as First Lady she dared not step out of the bounds of the East Wing and in the fictional account ended up in turmoil over her decisions at the end, because she was not expected to have a view on topics outside the safety of education. (my brief summary...I'm not Curtis Sittenfeld).

I'm aware we elected Barack Obama and not Michelle Obama, but it would be nice if we celebrated her entire being a bit more. I'm not calling on her to be an advertisement or to become a shadow member of the government, inserting her own concerns out of a marriage rite. But I am offering a friendly reminder that Michelle Obama is cool...not just because she dresses nicely, has toned arms, is married to Barack Obama, or is the descendant of slaves. She's cool in spite of it all.

But now that I mention it, I wonder if anyone cares about what Carla Bruni-Sarkozy thinks. Is it just an American phenomenon where we are so intrigued by the spouses of those we elect into power to the point where we expect to be bewitched by them and are invariably saddened by their impact on policy be it too much or too little. Should I be able to pinpoint the issues that the first lady has pushed for for the last few presidencies? Oh Eleanor, what have you wrought?