Nightmares Where Every Night is A Fantasy 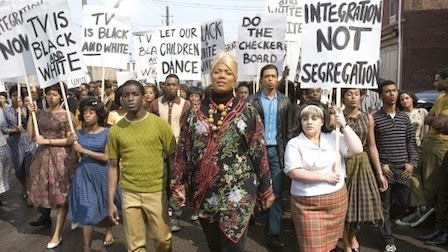 Good Morning Baltimore!  The kids can dance together, but there are still two sides to the dance floor.

It is still the kids. In the Baltimore created by John Waters for Hairspray it was the kids who wanted to dance together. In 1960s Baltimore it was the dance show. It was also the theme park. It was the reality. It was repeated with Zac Efron for the 2000s. Today it’s the high school students who took on the legacy, organizing a mass protest including a walk-out, arms collections (rocks), and a call to action, bringing all eyes to the city after a week of mostly peaceful protests.

So there was the Civil Rights Movement, and the notorious unrest after the assassination of Martin Luther King. But there is a 51 year gap to the story. For our (ok, my) pop culture trained brains, it has been pretty bleak. The Wire. Homicide: Life on the Streets.  Roses like Jada Pinkett Smith and Tupac grew in that concrete. Treasures like the National Great Blacks in Wax Museum emerged like a flare and melted in the consciousness. Druid Hill: Sisqo.  There is something that does not logically flow.  What happened between 1964 and 2015? It seems to be all hard knocks from the outside. Those kids who protested at the theme park 51 years ago, should have been the ones guiding the city through yesterday, preventing what we see today.

The gang bangers may have forgotten about the drive by. But no one is singing that it feel so good in the hood tonight.

No one thought a dance floor was enough. A theme park can only entertain for a while. So a roller coaster of ineffective changes have brought us to back to Baltimore, Maryland today. Freddie Gray was killed under questionable circumstances, and no one can provide answers as to why. People are fighting for their lives to have meaning because of this.

I included what I’ve seen shared the most today. To be perfectly honest, I haven’t read all of  these. My head can only take so much of sad imagery and heartache.

Best/Most Shared of the "Internets"

He shows how the news talks about black people by talking about white people instead. By Chris Hayes (Curated by Franchesca Ramsey)  http://www.upworthy.com/he-shows-how-the-news-talks-about-black-people-by-talking-about-white-people-instead?c=fea