Because: They're Not Missing 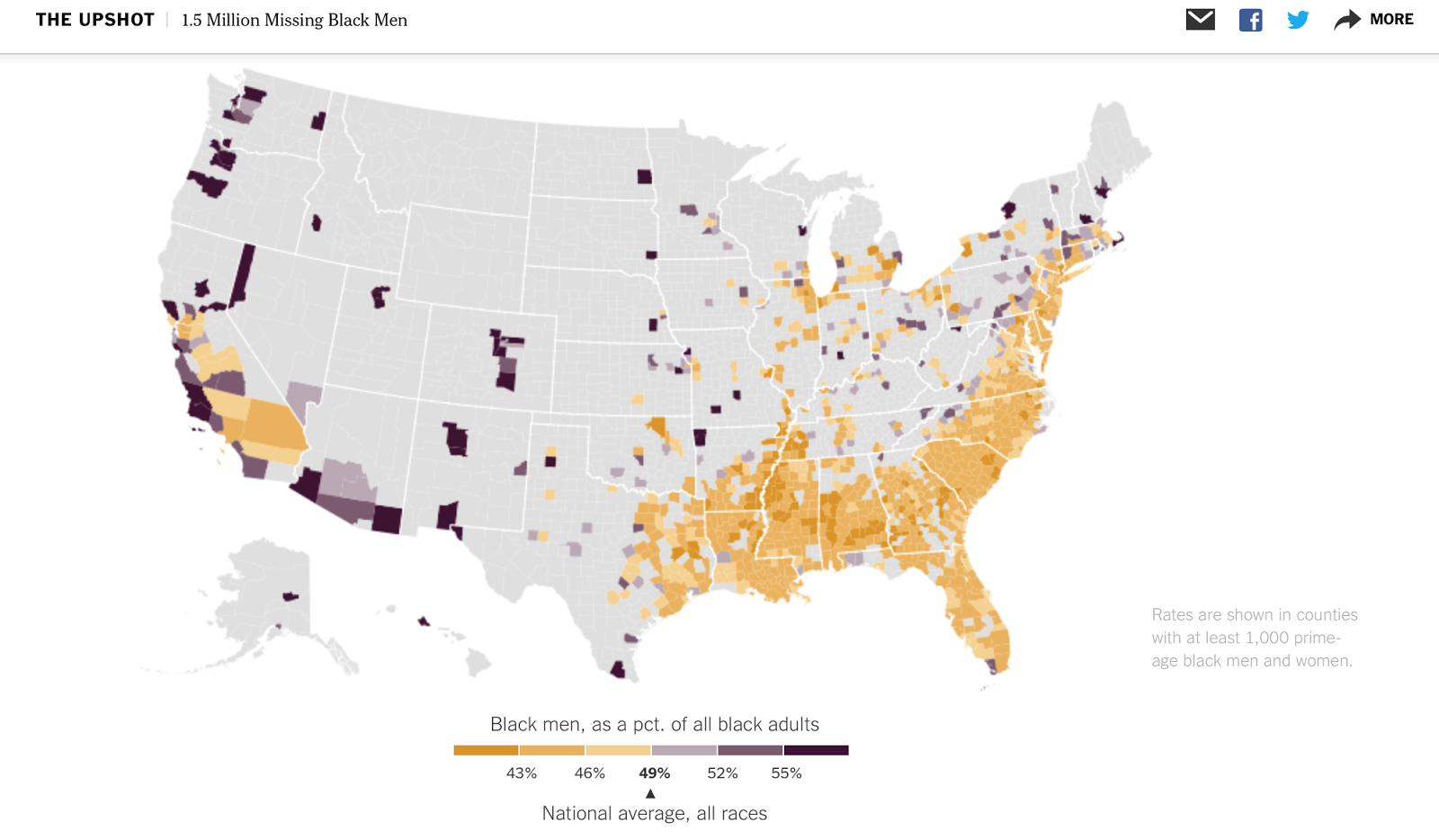 On a daily in America, children wake up missing their fathers. Mothers miss their sons.  Wives miss husbands.  Girflfriends miss boyfriends. As the NY Times wants to remind us, that's exacerbated for blacks living in America because 1.5 million men are "missing" as they would put it.


What the New York Times is reporting is not a new phenomenon. Daily, news reports around the country share information about incarcerated black men and also about deaths which occur for a variety of reasons: murder, foul play, heart disease, lack of medical care, etc.  Even the beloved New York Times participates in these discussions whether it is on the “marriage crisis” and black women, fatherlessness, or any other number of social issues. The United States has a problem with incarceration and the rates of black male incarceration are discussed at the root of various social issues.  Also, some people do dumb stuff that gets them convicted and sent to jail. Are the odds stacked against them sometimes? Yes.  Does that mean they should have committed a crime? Most likely, the answer is no.

But are these people who are in jail actually missing?  No, we know where they are and we have known for quite some time. The staggering statistics that the New York Times provides hints that this must be part of a lived experience.  This is the reality in America. The men cycle through jail. There is a well-documented and discussed school to prison pipeline. There are also people and programs already working to address this issue that could readily use support. They have been working because there doesn’t need to be a widely shared newspaper article to realize there is a problem. “Image Activist,” Michaela Angela Davis pointed to the ills of waiting for the coverage last week in a tweet:

A great Facebook thread with artist Pamela Council, brought to light some of the problems with using the word “missing."  "Missing" takes the state’s active participation in this process of disappearing black men out, and makes it more of a random occurrence. A loss for a community does not equal a person who is lost and cannot be found.  Historically blacks in this country have gone “missing.” Often in these cases they were killed due to entrenched racists practices (hello post-Reconstruction South) or finding a way to escape a situation or institution. Incarceration was another beast that did not mean a person was missing. It meant that they were being punished, often wrongfully, for a crime. To willfully use “missing” as a term to discuss what is going on now  puts us back in that position of unknown acts and nighttime escapes.


What we should talk about when we talk about the black and missing, are the actual missing. Websites like Black and Missing focus on people who are missing in America. These are the kids who do not get the Amber Alerts. These are the people being trafficked who no one notices. These are the people not being discussed nightly on the news. Charting their plight does not mean dismissing the issues of incarceration and death; it means acknowledging all of society’s ills and finding several solutions.


Ultimately, this is a matter of semantics. “Missing” conjures an emotional tug that a word like incarcerated would not. But it also suggests that we have to go looking for the people. What we need to look for are solutions. The charts provided by the NY Times provide a nice basis for seeing what we already knew. But the new found shock and horror? You can miss me with it.
Labels: Commentary Fact Check Please journalism Media coverage News NYTIMES