Such the Drama: For Colored Boys 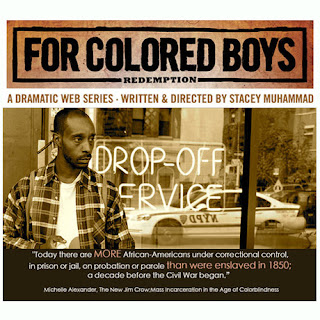 For Colored Boys is a fresh web series focussing on Benjamin Boyd Sr.'s return home after serving time in prison for an unspecified conviction. He returns to his life where he left his partner (girlfriend? wife?), and two children: a son who is now 20 and a daughter who is currently a teenager.  The series, which riffs off of Ntozake Shange's choreopoem For Colored Girls Who Have Considered Suicide When the Rainbow is Enuf,  will continue to tell the story of seven black men. Since the episodes are short, it takes some time for the characters to be introduced and developed, but straight from the pilot the viewer begins to understand the dynamics and the challenges of the main players. Stacy Muhammad - creator, writer, and director-  has previously created a docuseries under the same name, as well as other productions documenting the lives of black men.

The show is dramatic. So far, the cast has done a great job of portraying a realistic version of the events laid out in the script. And with their credentials, they should. The main character, Boyd Sr., is played by Rob Morgan (Pariah). His son is played by Julito McCullum (The Wire). Other stars include Jacinto Taras Riddick (whose relationship to Boyd is still undefined) and Tim Reid who has yet to appear, but whose appearance has been highlighted in the introductions. Isaiah Washington is an executive producer, and television host/commentator Marc Lamont Hill has also lent his hand to production efforts. There are all stars working on Muhammad's work and it shows in the production quality from the staging to the scene cuts to the dual action juxtapositions. There are moments that go off into the artsy fart deep end- such as the redemptive dream sequence. But, creatives should be allowed their own indulgent moments in creating art as long as it doesn't derail the story line. For the sake of the artsy farts, this is forgiven.

Being a weighty issue drama in web series format does provide its own set of challenges for the show. Even the "deeper" shows on Black and Sexy TV, Alright TV, and Issa Rae productions tend to be pretty light.*  But with For Colored Boys, the short length of episodes does more than leaving you wanting more- it seems to cause a fast development of certain issues to get the viewer to connect. Beware: someone's pregnant, and you know it from the first time she opens her mouth, even though its supposed to be a "reveal." There's also the feeling that after a while, this all gets too heavy. In a world saturated by devastating stories and statistics, it is natural to want to see varying sides of humanity of these men- the part that struggles and the part that enjoys even the most mundane parts of their life. Still, that doesn't detract from a desire to crave more, For Colored Boys.

While Muhammad openly acknowledges Shange's work as inspiration, its hard to not think of Keith Antar Mason's for black boys who have considered homicide/when the streets were too much  which is a more exact take on For Colored Girls. The themes in Muhammad and Mason's work ring similar to the pain of black men, including issues of incarceration, family dynamics, and love.


For Colored Boys episodes are released every Sunday at 7:00 P.M.

*Seeing as I have problems identifying a serious webseries that's not backed by Hulu, Netflix, or a major network, I think Stacy deserves a handclap!
Labels: ArtsCultureandEntertainment For Colored Boys Television Video Webseries