THAT'S JUST MESSED UP!
From a "Why lie, I need a beer" sign to "Barack, the Magic Negro" some things are just messed up. Really there's no other way to describe it. 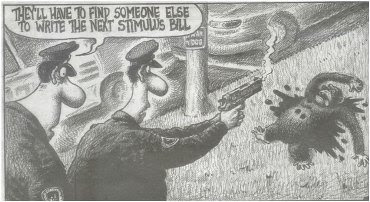 The New York Post decided to be brilliant and run this cartoon by Sean Delonas which will be interpreted by any smart, current event literate person as Barack Obama, depicted as a chimpanzee, being shot by cops. This is in light of a chimpanzee attacking a woman and cops having to eventually shoot the animal and President Obama pushing the stimulus bill.

Usually, I don't feel the need to discuss issues as blatantly racist as this one. We all know the historical implications of blacks being stereotyped as animals, particularly monkeys, apes, chimps and other non-homo sapien primates. But for all the post-racial hoo-ha that is being touted now-a-days (which I don't believe) you would think we have all moved beyond this. Apparently not.

At least be more creative with it the next time Mr. Delonas. Put a little work into getting people angry. It makes for better discussion.
Labels: Barack Obama Blacks in Politics But Really Though? Comedy News That's Just Messed Up