Nowadays, the etymology of a word comes under scrutiny a lot faster than ever before. People want to look at the usage, the appropriation, common definitions and a host of other issues surrounded popular slang terms to deem when it's appropriate, who can use the word, and to take apart  every bit of fun that popular culture allows. In this moment, the word to dissect is "basic." Originally starting as slang in the hip hop culture-basic bitch- several people are now talking about the mainstream middle class appropriation. Check out this Buzzfeed article for a larger trajectory.

Recently, I was challenged to create a public service announcement. Unable to come up with any way to do justice for a larger cause, I decided to help those that I could. I settled on the basics. In the words of my instructor, "I can't believe you sit around thinking about this stuff." Sigh, but I do.  My initial draft delved right away into basic bashing. 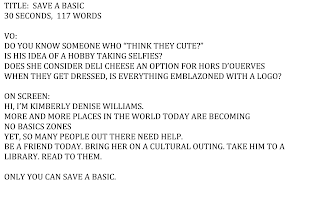 However, after some soul searching, I checked my privilege (it's magnificent) and decided that even this was a bit too much for me. I found the classism/elitism overbearing and began to think of how my friends and I actually use the term basic in everyday conversation. Honestly, I just couldn't get out of my head the idea  of someone whose only outlet for food was the corner store. Food desserts are real.

But, I still wanted to address the idea of basics and how we go about identifying them. I don't like pumpkin spice anything, but it's boggling to think that we're basing this classification on a generally enjoyable treat.

If we are being 100% truthful, you do know someone who is actually a basic. And it is so sad, because  by all means the actual basic usually knows better. They also actually have the ability to put a little more originality and class into their endeavors. So I enlisted some friends, and we'll be bringing you a series of PSAs to #Savethebasics. I mean, if not us, then who?