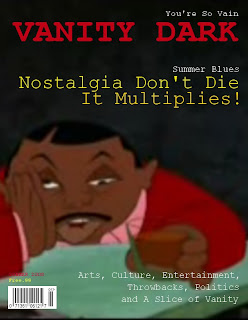 Slow JULY??? Whatever could I mean? After all with all of the Skip Gates hoopla, the craziness in the entertainment world and what not the blogosphere is teeming with issues that are being discussed?

Okay more like I've been a little self absorbed and also issue fatigued. I can't sit and criticize all aspects of black media, because truth be told, I(a very well educated and cultured person) actually don't mind a great deal of it. I also never bought into post-racial America and did live in Cambridge for four years. Thus my impressions of the town, racism and town-gown relations were all set and haven't really changed post the issue that won't die-Skip Gates and James Crowley. Don't worry...I'm not done preaching my gospel of television and early nostalgia. I just needed a little break.

I've also been working at being a good teacher for my SAT kiddies, actually knowing what we're going to discuss, going at RBMVibes business, researching for a media ideas company, as well as mentally preparing myself for the 9-5 that's to come. My dear laptop is also on its last leg. So I disappeared into KimSwaSha(that's the imaginary kingdom ruled by me that I created when I was 8) and worked as well as celebrated the month of July...since after all it is my birthmonth!

With that said, I apologize-especially to STW who emailed me to remind me to write. I have reasons, but no real excuse. I know I have officially gone against my blog resolutions, but I'll try to make it up.

So with all that said..in honor of my twitter account, here's #musicmonday. It's a little vain, but what's vanity but a fair?