Because Whimsy is Useful

"If we laugh and sing a little as we fight the good fight of freedom, it makes it all go easier. "-Sojourner Truth 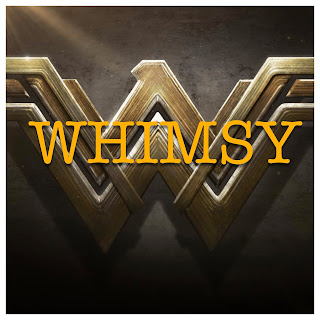 On Saturday June 3rd, I sat in an sold out movie theater in Washington D.C. and traveled back in time to 1918 via Wonder Woman. Now, I’m no superhero fanatic, but as a lover of pop-culture and history, I was excited to join the hype of the movie’s historic opening weekend. Blame it on the podcasts. When Jill Lepore’s The Secret History of Wonder Woman came out in 2014, several of the podcasts I stan for covered the book and the history. Seriously, the history is worthy of it’s own movie. Most salaciously there’s an affair between a professor and his student in the background, but around the periphery you have other big ideas and innovations  that have pushed our history forward: feminism, contraception, lie detector tests, psychology, and then there’s Harvard.  With all of that, and a minor but notable interest in wartime culture percolating in my  dork heart, I was thrilled when a friend asked us to remember the wonder on opening weekend. And while the film did leave us in awe, it was whimsy that stayed on my mind in the weeks following the film.

This particular incarnation of Wonder Woman does provide a lot to like. From Chris Pine’s Steve Trevor (swoon) to the lush isle of Paradise, there is beauty and depth in the imagery. Without a doubt, there are also problems. Commentary abounds concerning the gendered and racial representations. On one hand, there’s a notable lack of diversity amongst the women with prominent roles despite some glimpses of it in Themyscira. But then, the inclusion of a Blackfoot Demi-god as a character was an interesting and unexpected addition to a narrative that didn’t center on Americans, and even briefly addressed colonial racist attitudes. The film is not perfect, but it is perfectly entertaining.

Wonder Woman, portrayed here by Gal Gadot,  may not be the feminist prototype the world was waiting for. As she wields her message of love via a lasso and cuffs, many women in America are decidedly less hopeful that good intentions and truth will win and save the day. In fact, it’s probably truthiness that will kill us all. Even though America’s current chief of state was largely placed in power by certain women and is backed by the likes of his family and one Kellyanne Conway, it’s also been women’s voices at the forefront of the resistance both  before and following his rise to power. The most discussed resistance march was led by women. The voices the nation has turned to include the elected powerhouses of “Aunty” Maxine Waters, Elizabeth Warren, and Kamala Harris. Public voices like Angela Rye have been putting the lost souls in their place. Their resolve and intelligence are reflected in the women with which I have the privilege of interacting with daily.  We love and respect these wonderful women, but deny the existence of some of their same characteristics in our latest screen hero: trained in martial arts, multilingual and well read- although naive.

What’s the characteristic that brings so many to disregard Wonder Woman? Perhaps it’s her capriciousness, her willingness to act on a whim backed by her central and core message. The notion of whimsy is what kept me connected to Wonder Woman. Prior to seeing the film my friends and I had a much needed girls weekend where we reflected and debated and laughed and blew bubbles. In those moments, we paused to ask if we were experiencing “whimsy.” The film made me so certain that we were and that acting on a whim did not have to be negative. True love of superheroes is cultivated in childhood, providing yet another guide for moral thinking in a messed up world. When that wonder is recalled and transferred into adulthood it’s transformed but not destroyed. The same can be done for whimsy. It can be moved from rash fancifulness to curious action.

Whimsy is a power missing in daily fights against “the man” in our daily lives at work and at play.  A little informed whimsy, like the one I rediscovered during that girls weekend, has the power to rejuvenate, fuel innovative thoughts, and lead to your next surprise attack.  If you look closely, in the polished veneers of today’s heroes, you will see the whimsy in them too. It’s in the unique turn of phrase, the quick wit, and the creative solutions to the myriad of current problems.

Remember the whimsy. Act on it.  Be wonderful. And sure, save the world too.