Yes, everything about Fall TV gets me to speak in Oprah Voice! 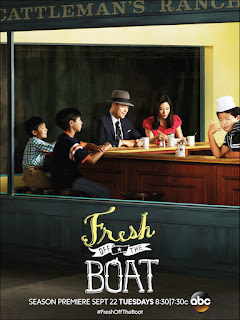 It’s the most wonderful time of the year: The New Fall TV Season. And surprise, surprise visual art once again has its place in the pantheon. Last season, a lot of talk was dedicated to the abundance of Kehinde Wiley and Basquiat work showcased on Empire. But the Lyons family isn’t the only hip hop obsessed family with an eye for art. It turns out Fresh Off the Boat has also been making it’s own statements. Both season one and season two features American art classics reimagined with the Asian American cast for the promos. Read more on Art is Now Pop.
Labels: abc ArtsCultureandEntertainment Fresh Off the Boat Television