And then they did this: The Kardashians. GONE TOO FAR.

Venus Hottentot didn't get shipped for black women to be sold out like this. 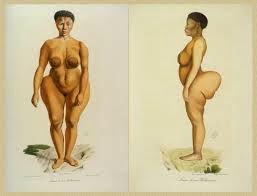 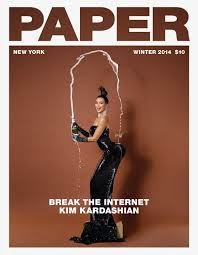 There's a drive to not call a spade a spade in this situation. Jean Paul Goude is honored for his forward thinking work, and his relationship with the one and only Grace Jones brings to mind the cutting edge, the daring, the boundaries of blackness that are great to push (at times). There is little to be found (according to my online search) in criticism in his original champagne piece. That features a glass of champagne on the posterior of a black woman with her ponytail standing up.  Yet, if visioniaries like the more readily consumed like Quentin Tarantino are brought to scrutiny, then why exclude Goude's work. Kim Kardashian's breaking of the internet comes on the broken backs of exploited and fetishized black women who have not received the same honor for what they have-naturally. I searched to contextualize this piece and put it into context. Thankfully, someone at The Grio, connected the dots.

Is Kim Kardashian to blame in this situation? Not exactly. Do we blame her for making money off her image? Supply and demand are every bit at play in this situation, and apparently the demand is there. We consume this and allow her celebrity to be manifested in an even bigger display. There have even been suggestions that Kim Kardashian is at the center of inhumane treatment, because if she were blond or fairer skinned, she would be accepted.

But her sister Khloe, Yea...I'm blaming her for supporting this foolishness. You were my favorite Khloe. Why? Is there another KKK than the one with hoods? Do we think the all white outfits in this stand as a funny take to the terrorism that the men in all white with hoods used as a tool against an entire race of people? What black man has Kourtney...I don't even want to know. Arghh. Sigh. Terrorists in tight clothing. 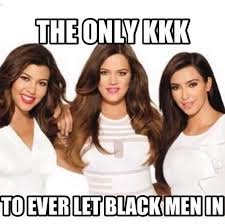