No Sleep Till Brooklyn- An Authentic Brooklyn Rmble

R[u]mbling and R[a]mbling- No Sleep Till [AUTHENTIC] Brooklyn. Let's Go!

To reminisce on Brooklyn in the last decade and its dominating global impact is to acknowledge the importance of hip-hop in the current memory formation of who and what defines Brooklyn. Brooklyn's own role in hip-hop's creation often overshadows the Bronx's claim as its birthplace. Even though that's true, Brooklyn is where hip-hop- for better or worse, grew up. Over the course of this maturation, Brooklyn's reputation became magnified and assumed its role as a worldwide brand.

Several esteemed authors have covered the birth of hip hop. The culture is typically defined by rap, graffiti, and break-dancing. In Brooklyn- just like everywhere else that was part of the culture's nascent- hip was was created and spread by the everyman. Those who would have been the proletariat in every day life, took on the role of creator and taste maker when it came to hip hop. Cultural yeomen were made out of teachers, sanitation workers, and those who worked off the books. Within Brooklyn, anyone and everyone helped pushed its creation further and allowed it to encompass all the variations that made it great. 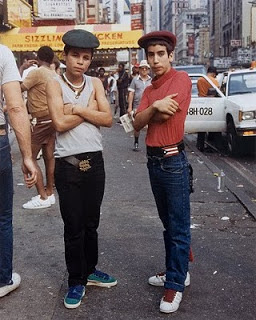 The great thing about hip-hop and Brooklyn's relationship was and is that it is symptomatic. It's essentially two cultures working together and bolstering all aspects of each other. The enhanced view is what got pushed outward. Serious. Contemplative. Black. American. Jewish. Eastern European. African. Caribbean. Male. Female.  It was a youth culture greatly influenced by the elders and older art forms. Beyond all the differences lies the understanding that all segments form a whole, and that the existence as one entity does not mean an actual love. It's like warring siblings. The family name will be defended, but the day to day interactions reveal the truth. There was still room for hate. Room for disagreements were allowed and that intra-community  anger and diversity permitted the creativity. For every area of Brooklyn or hip-hop where a person may feel excluded, another part of the community is willing and ready to welcome them. Anywhere where hate or discrimation exists is countered by another area willing to fight.

Along with the great diversity of outlook and ethnic/cultural backgrounds, the socio-economic blend also permitted the Brooklyn culture to expand and be represented in hip hop. The emergence of hip hop came in the shadow of the restless seventies and the Summer of Sam that left a lot of the borough devastated. Places like Bushwick struggled. Neighborhoods like Midwood changed, but managed to fare alright. Overall the borough languished somewhere between the bleakness of 11PM news ghettoes and the cinema veneer of a struggling Wall Street.

Necessity is the mother of innovation. A need for entertainment divergent from the mass produced and sanitized  demanded relevant entertainment be created. The great American motivator otherwise known as poverty also played a part in allowing people to find new ways to signify and point out their individualized greatness. Yet, as important as  the realities of poverty and lack of access are to the creation of Brooklyn's unique culture, those are not the central points of the socio-economic situation that pushed Brooklyn to flourish as a representative culture. It was rather  a nature of mutual respect and enjoyment of each others' creative abilities that permitted the spread. So while all the internal strife and intra-community issues manifested throughout the region in acts of racism and continued segregation- the ability to express  the pain in an art form was respected.  Hip-hop may have been localized within certain groups, but the atmosphere for it to spread was open. Jenny Holzer was art. Michael David was art. Basquiat was art. The Fat Boys were Brooklyn Hip Hop. Adam "MCA" Yauch was Brooklyn Hip Hop.


There would indeed be no sleep till Brooklyn.  The borough was a destination for immigrant families and creatives whose New York dreams would not survive Manhattan. Brooklyn was a place for family and family valued alongside gangs acting as substitute families for those who needed one, and loosely formed collectives for anyone looking for a home. Brooklyn allowed a restless sleep giving way to grandeur that fueled the day to day bustle of the greatest.