Macys Seeks to Confuse Father's Day for all New Yorkers, not just Harlem.

Oh the perils of multiracial advertising:
We cry, we yearn for inclusion, we shout of discrimination and create campaigns around the perils of identity politics and representation in the media. We inspire dreamy eyed aspiring journalists to go to school and study media representation and write chapters of dissertations that ... (Okay, that was only me. Yes, before I became disillusioned and repackaged as a former aspiring journalist trying to make sense of the utilities industry). We get to the point.

Its 2010 and although the bitter can always point out areas of failed representation, we have to give credit where it is due and acknowledge that long strides have been made in terms of a wider mainstream representation across racial groups. Then there's the Taye Diggs syndrome.

Taye Diggs is that black guy, that all my fellow educated friends met somewhere during their academic studies. If you didn't have or can't remember the school days, just think of all the times we've seen Taye Diggs in a role recently (post helping Stella get her groove back, being anyone's best man) good or bad, right or wrong.

If you really have no idea what I'm talking about, just think of this guy.


Best Buddy (may be confused with Best Man) Taye:

You see Taye is everything the collective "we" asked for and discussed in magazines, beauty shops, churches, and around dinner tables. Everything we asked for, before we got specific.

And then, we got the watered down Macy*s Taye.
(Disclaimer, it's not Taye Diggs) 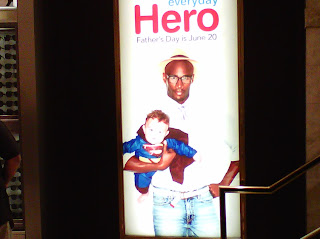 This picture makes little sense to me. I don't know this guy. I don't know many people who do know this guy or want to know this guy.  Who is this baby? Where did the baby come from? Why is this phenotypically black man kidnapping this phenotypically not black child without an allusion to his multiracial friends in sight? Whose Father's Day is this? This is worse than trying to figure out where the one curly headed child came from in the black family tv shows.

Maybe, Macy*s is making commentary on the changing demographic of...

This made sense Macy*s. Safe, but adorable and sensible.

Well to all my fathers, no matter if you and your children look alike, Happy Father's Day.
Labels: Advertising Politics of Representation